I know, I know. I can’t really hate Atticus Finch. First of all, he’s not real, he’s just a character in To Kill A Mockingbird. Second, he’s a noble character — a paragon, really. A lawyer who fights against racism in a small southern town in the 1930s. A widower trying to bring up a couple of kids on his own.

“I wanted you to see what real courage is, instead of getting the idea that courage is a man with a gun in his hand. It’s when you know you’re licked before you begin, but you begin anyway and see it through no matter what.”

? Harper Lee, To Kill a Mockingbird

He was played in the movies by Gregory Freakin’ Peck, for god’s sake. As played by Peck, Atticus Finch was voted the greatest hero of American film by the American Film Institute. He has a goddam postage stamp! 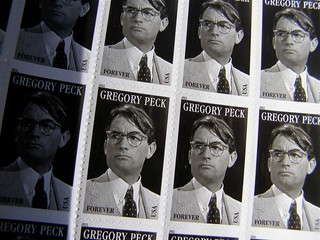 Daniel Baldwin and Isabella Hoffman named their son Atticus. So did Summer Phoenix and Casey Affleck.

How could I hate Atticus Finch?

Because I work in the world of legal marketing, and in that world, everything is named Atticus.

I remember in Albert Brooks’s comedy album (if you are under age 30, feel free to contact me to find out what an “album” is) Comedy Minus One, he talks about what it’s like to visit San Antonio, Texas:

Alamo Rent-a-Car; Alamo Car Wash; Alamo Laundry (in by nine, out by five); Alamo Motel (hourly daytime rates); Alamo Diner (you’ll remember the Alamo); Alamo Quick Print; and on and on until you want to puke up the word “Alamo.”

My question to lawyers is: don’t you guys and gals have any other heroes? What about Abraham Lincoln Marketing? Or Clarence Darrow Coaching Program? Or the She-Hulk? Thomas Moore? Matisse? Julio Iglesias? Robert Kennedy? Gloria Allred? Alger Hiss? Nelson Mandela? Fidel Castro? Gandhi?

Anybody — but Atticus Finch.