My brother Bruce called tonight. When you are close enough to someone for long enough, you know what they’re thinking. I saw his number on the Caller ID, picked up the phone and said “Yes, I have it on.” I knew he was calling about the CBS Special “The Night That Changed America” (Referring to the first time The Beatles appeared on the Ed Sullivan Show). He immediately replied, “You have to write a blog post about going to see them in person.” 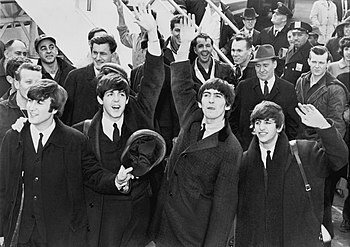 Like many people my age, I have vivid memories of sitting cross-legged on the floor of my parents’ den, watching a B&W TV as The Beatles were introduced. I had started reading about them in late 1963 — mostly about how hysterical girls in England threw “jelly babies” (whatever they were) at the band.

And, also like others, I was completely captivated. Soon the walls of my bedroom were covered with news clippings about The Beatles and I stopped getting haircuts, a development that did not please my father, whose ideas of masculinity mostly centered around Frank Sinatra and Humphrey Bogart, and most certainly not on wearing your hair like a girl. Later, in my 20s, my girlfriend Judy Whittingham, told me she started every single diary entry with “I love The Beatles!”

OK, I could go on, but here’s where my story is unlike most of my contemporaries. I saw The Beatles in concert, on Thursday night, August 18, 1966 at Suffolk Downs racetrack in East Boston.

I had a privileged childhood. My family had a beach house where I would spend every summer. One of my summer pals at the beach was Richie. And Richie’s uncle owned Tyson Ticket, the top agency in Boston. So Richie got the precious ducats for us. We were sitting in the third row with the Kennedy kids. The opening acts were The Cyrcle (“Red Rubber Ball”) and the vastly underrated Barry and The Remains (whom I knew a little bit from all their gigs at The Surf Nantasket). The screaming that began when The Beatles hit the stage felt like you had just stuck your head in a jet engine. Nonetheless, it was a great experience, and I’m certainly proud to say that I saw the Beatles in concert. I saw the Rolling Stones, and Bob Dylan, and Peter, Paul and Mary; and Ike and Tina Turner; and Bruce Springsteen seven times; but I can always stop a conversation of musical reminisce by mentioning that I saw The Beatles. Not so bad, huh?

Eleven days later, The Beatles played in San Francisco. It was the last live public concert they would ever give.

You can’t go to the concert I attended, but if you’d like to get a ticket, you can still get one eBay for 0.

2 thoughts on “The Beatles: It Was 50 Years Ago Today”