In 1975, I was a sportswriter at the Woburn (MA) Daily Times. Among the glamorous duties at a suburban daily newspaper is covering such events as Pee Wee Hockey games. It could be worse. If you were a political reporter like my pal Eric Riess, you got to cover school board meetings. One day I wrote a one-sentence story that went something like this: “Jimmy Jones scored the winning goal as the Blue Devils beat the Jets, 5-4 in a Middlesex Pee Wee Hockey league game yesterday at Smith Arena.”

The next morning, after the story appeared in print, my phone rang. It was a woman who identified herself as Mrs. Johnson. She was very angry. “My son Fred scored three goals in that game!” she told me. “I know,” I said. “But Jimmy Jones scored the winning goal. And I wrote about your son last week.” This did not satisfy Mrs. Johnson, who went on for a full ten minutes on the injustice I had perpetrated and my own personal shortcomings as a sportswriter. I was pretty upset (being young and new at my job) and went in to vent to my moon-faced managing editor, James “Jim” Haggerty, Jr. He listened politely, pulled the pencil from behind his ear, and gave that nervous laugh that he had. “Heh-heh-heh,” he said. “If you wanted to be popular, you should have been a fireman.”

Marketing lesson: If you write things in public, whether newspaper article or blog post, somebody is going to disagree. Also, if you want to be popular, you might want to see what opportunities exist in your local fire department.

It has been a long while since I had a “boss” in the sense of one individual. I started SmartMarketing in October 1994 and haven’t had a “job” since. Of course, that doesn’t mean I don’t answer to anyone. When I was about eight years old I said to my father (who owned his own business), “Dad, you’re so lucky, you don’t have a boss!” He looked at me with some amusement and imparted his usual wisdom: “Son, when you’re in business for yourself, every customer is your boss.”

Nevertheless, up until 1994, like most people, I worked for companies and had bosses. When I was 13, I got my first real job working at a tile and flooring shop (VersaTile — get it?) operated by a family cousin named Joe Bitto. Part of my job was to ride in a delivery truck, assisting the driver, a man named Bud. He looked exactly like Mr. Clean, minus the earring. His head was shaved bald, he wore a uniform, and he had muscles like Mr. 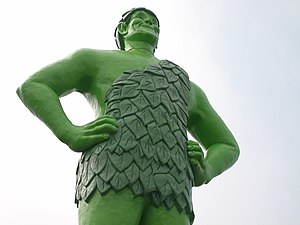 He watches over the gas stations and trinket stops of Blue Earth, MN. (Photo credit: Wikipedia)

Olympia from constantly tossing around 50 lb. boxes of tile. At every stop, he would engage in banter with the guys on the loading dock and tell some dirty joke. (Sample: “If you have a green ball in one hand, and a green ball in the other hand, what do you have? <answer> The Jolly Green Giant right where you want him!”) That was one of the tamer ones. As a result, I returned to school in September something of a playground hero, usually surrounded by a gang of boys whom I would entertain with my latest filthy anecdote.

But I digress. Now comes the lesson. When I wasn’t running around with Bud, furthering my education, I was doing slave work at the office/store. One day, Joe instructed me to carry a roll of linoleum to a woman’s car. (Does anyone know what that is, anymore?). The roll of linoleum was taller and bigger around than I was at that time, and as I wrapped my arms around it and started to stagger toward the front of the store, Joe said, “Mark, be careful crossing the street with that!” I looked up at him, touched by his concern. He fixed me with his beady eye, the cigar firmly clenched in his teeth, and said out of the side of his mouth, “We don’t want to get blood on the lady’s linoleum.”

Marketing lesson learned: It’s not about you.